Automation is the transformation of a work process into an automatic process flow. Modern automation is usually associated with computerization, in which manual, mechanical or electromechanical data processing is converted into electronic data processing. Computerization is acceleration. If comparing the mere frequency and reaction speed of a modern transistor with a brain, one week of computer simulation corresponds to 20,000 years of human thought processes. Therefore, more and more tasks are left to a machine in order to make better use of the human potential.

"[There] is a certain meditation that comes from drawing in type design, [...] it is just very fulfilling for me - as an activity." [Seb McLauchlan] The almost meditative fulfillment due to the practice of mindless work processes may be undisputed, but in our fast-moving society only very few people can afford it. People are forced to keep up with human impatience. If we look at contemporary phenomena such as fast food or fast fashion, it is obvious to what extent quality suffers from speed. However, this does not have to be the case. In the example of a pocket calculator, the problem is rational and the mechanical process infallible. Therefore, the increased speed can even lead to an increase in quality.

"Are we designing tools that empower us or autopilots that replace us?" [Pieters/Winiger 2016] To answer this question, one must first understand what modern tools such as "artificial intelligence" are capable of. It is assumed that the complex interconnection of nerve cells is responsible for perception, thought, consciousness and the ability to learn. Neuronal networks or machine learning are the attempt to transfer brain research to a computer model and thereby create a learning algorithm. A distinction is made between Artificial Narrow Intelligence (Weak AI), which can fulfil one specific task, and Artificial General Intelligence (Strong AI), which is able to fulfil any "intellectual task" of a human being. Intellectuality or intelligence are often mistakenly equated with creativity. Examples like "DeepArt" in which AI imitates art styles, are however no more valuable than the Chinese art forgery factory in Shenzhen. Inspiration comes from cross-connections to other experiences and influences for which at least a strong AI would be needed. A strong AI does not exist yet.

"I think ML and AI can do wonderful interpolations of existing stuff. But that is not what type design does." [Erik van Blokland] All known attempts in the field of typography using AI are so far only blending the existing. However, if the tools were used not autonomously but assistively, the deficit in creativity could be bypassed. "Assistive Creation Systems" offer a facilitation of the craft whereby the focus can be directed to superior problems.

By facilitating the craft additionally the accessibility is increased, whereby presumably everyone considers himself able to exercise this profession. Such a trend can be already marked out in the Web Design, by platforms such as Squarespace, or in the Branding, with the increased emergence at Logo generators. A study by the Oxford University in 2013 entitled "The Future of Employment: How Susceptible Are Jobs to Computerisation?" estimates the likely computerisation of 702 occupational fields and places "Art Direction" 95th with 2.3% probability and "Graphic Design" 161th with 8.2% probability. This is probably due to the fact that Art Direction is linked to conception and decision making, whereby Graphic Design rather involves implementation or craftsmanship. Good type designers should not feel threatened by automation, but craftsmen, copy cats and fuckboys should. The idea will always be more important than the craft, because in the craft the machine is superior to man.

"Automation does not simply transfer human functions to machines, but involves a deep reorganization of the work process" [Gerovitch 2003, p. 122] For this purpose, the work has dealt intensively with the process of type design and has subdivided it into five steps.

In form, a distinction is made between a form from inside, a form from outside or a modular form. Most commonly used fonts are based on an inner form, because even if a font is drawn from the outside, as is usual in typical font design programs, it can still be designed as an inner form, for example based on a writing tool. The system turns a form into an alphabet via form analogies or overall proportions. In the third step, the tool, terminals and weight turn a system into a font. The fourth step, refinement, describes both the individual forms (i.e. collision, ink traps, form anomalies) and the overall form (spacing, kerning, hinting). The last step makes it possible to create a font variation from a finished font. 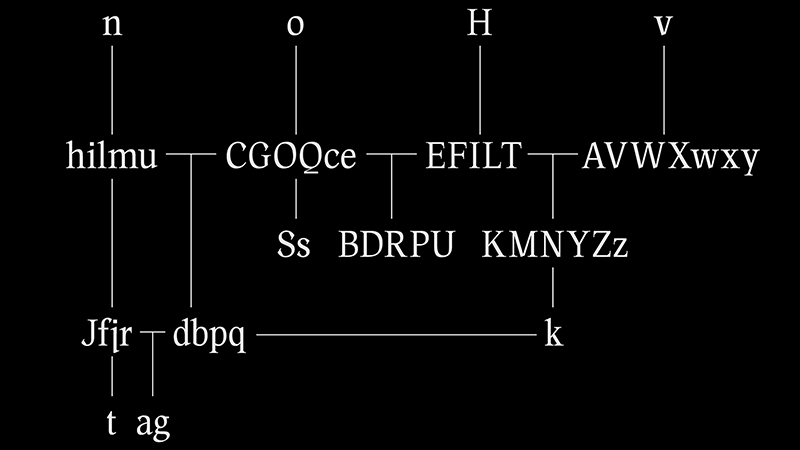 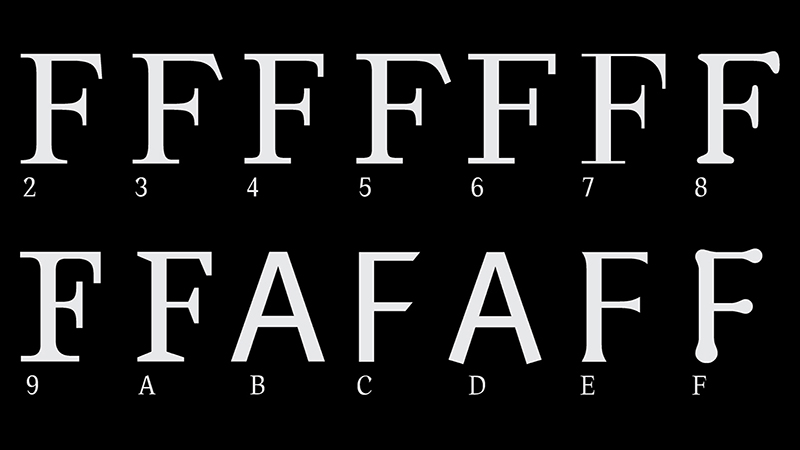 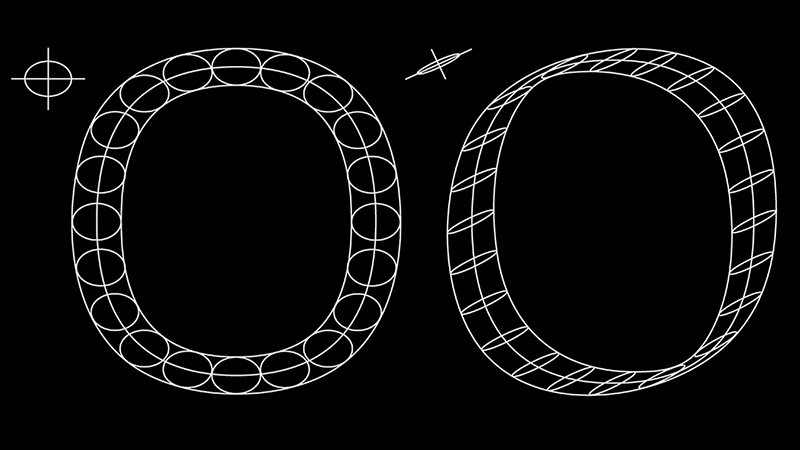 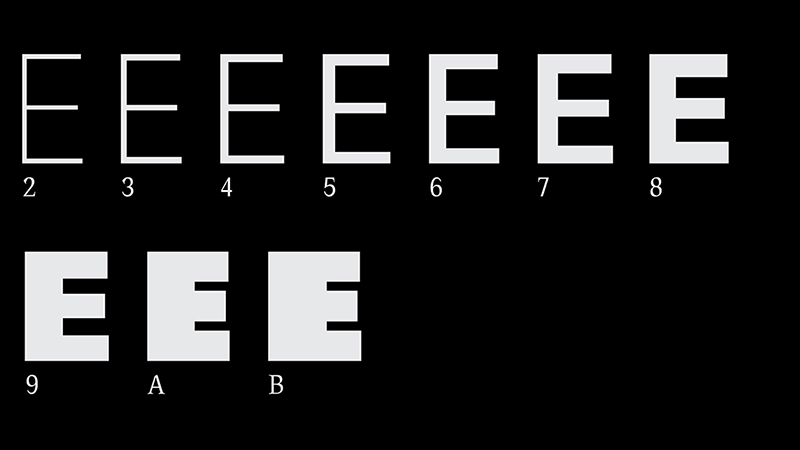 The attempt was to use automated processes to create fonts or font designs. Tools which are designed for type design were used, as well as self-created or misused programs to simulate processes which are not possible with conventional type design tools.

Using these tools and the process of type design, it was possible to create over 100 fonts and font designs over a period of three months, in addition to the written elaboration and research. These can be roughly divided into five categories:

1. fonts by variation
Some fonts were created solely by the step of variation, comparable to FF Blur by Neville Brody. Although these are the fastest designs, they are also the least suitable for continuous text due to the drastic changes required.

2. fonts through limited tools
Since "Full-Service" font generators like "Prototypo", "DLT LetterModeler" or "FontArk" already exist, they have also been used to create a handful of designs. However, in these cases form and systematics are strongly determined or limited by the programs. "Making smarter things also means that the tool takes decisions away from the designer. That is ok if I write my own, it is problematic when someone else's tools take away decisions from me." [Erik van Blokland]

3. fonts by "Art Direction"
With the fact that the craft is more easily computerized than the idea, the Description Language "Metafont", for example, can be used as a kind of craft assistant. Instead of drawing the curves by hand, one describes the font in mathematical formulas.

4. fonts with the help of assistive processes
"I know many colleagues who use iKern [...] but would never admit that in public." [Ferdinand Ulrich] Contrary to this statement, every tool possible was used to reduce or facilitate work for the designs. You can, for example, simulate a brush in Illustrator, create form analogies using components or use Inter- and Extrapolation to draw new weights, generate subscript or superscript and make optical corrections.

5. fonts with the help of autonomous processes
Finally, the question arose as to whether artificial processes can create or stimulate new ideas. For this purpose, autonomous processes were used as assistive tools. By training a neural network with the help of generated data sets and automatic form linking paired with manual selection, AI fonts were created that indeed appear contemporary and new (instead of a blend of the existing).

Automation could make some of us redundant. For this reason, there are a few rules to follow. 1) The idea is more important than the implementation. 2. Pretty is not automatically Good. (Fuck Eye-Candy) 3. Do not steal designs! (The computer can already do that better anyway.) And since automation already threatens the profession, we do not need to contribute additionally: 4. Do not steal fonts!